Winter Drought - It might as well rain until September - February 2018

Is it raining where you are?

Not wanting to be a kill-joy, but I do hope so.

The forecast for today in Panicale was a deluge but - as so often in the past year - there was just a brief shower and now the sun is out again.

Umbria seems to be the only place in Europe at the moment that isn’t flooded or deep in snow. January was lovely: sunny and dry … but it shouldn’t have been. We really need the winter rain and I fear that we are going through a dry winter rather like last year. We did have the occasional downpour early this month but will it be enough to top up depleted reservoirs, aquifers and – crucially to us here - Lake Trasimeno? 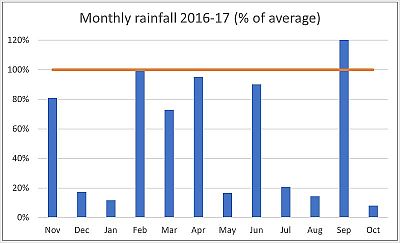 Monthly rainfall compared with the average for those months

Weather-watching friend Ian Robertson records rainfall at Paciano. Last year his measurements show that we received only HALF of the average rainfall in the season November 2016 to October 2017. No wonder our gardens and crops were in distress. And just to check that it wasn’t a local anomaly, another friend who lives near to Orvieto recorded the same degree of shortage. This is far more severe than the national institutions had reported.

It was in December and January that we really missed out last year and I fear the same has happened this year.

Official statistics reveal that during the first 6 months of 2017, in central Italy we only received 20% of the rainfall we would normally expect to get. Which means there was severe drought even before the infernal blast of summer arrived.

The European Drought Observatory (EDO) publish a map of Italy for mid-January 2018 which shows Umbria and southern Tuscany as still being in severe drought, whereas most of Italy has recovered; only Sicily and the mountains of Piedmont also remain in such distress. And this is during the ‘rainy season’. 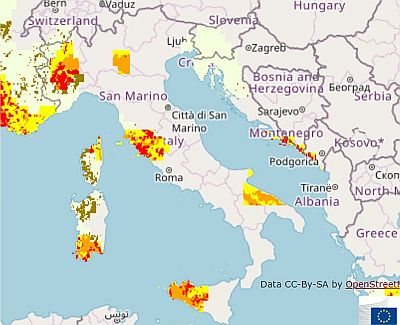 Is there anything we can do about this? Well not really, we can’t make it rain. What we can do is re-think the way we garden and to make every last drop of water count.

If any of you in the Castiglione area keep rainfall records you are welcome to share them.